National champion wins for Adur on series debut, but reigning club champions Eastbourne take the round.

Renowned wet weather ace Olly Jefferies dominated round one of the 2021 MB Models King of Clubs. Cold temperatures and heavy rain made for treacherous driving conditions for over 100 drivers at the Demon Raceway, Aldershot Model Car Clubs home track.

Appearing to sandbag at times during qualifying, winning by the smallest and safest of margins, Jefferies demonstrated mastery of adapting a touring car to the conditions to clean sweep the Modified Touring Car class and win for the Adur club.

Still, it was far from straightforward. After the races, Jefferies explained what a challenging day it had been. "Racing in these conditions is really tricky, and it's so easy to make a mistake. The key for me was to run a consistent setup on my Xray T4-21 all day to deal with the constantly changing conditions. Keeping the car easy to drive helped me steer clear of mistakes and take a satisfying win".

Eastbourne's Harley Eldridge produced outstanding drives to finish on the podium in each of the two finals. Coming through the field from seventh on the grid, Eldridge delivered the fastest lap of the race to finish leg one in third, just behind second-place Zak Smith. In leg two, a combination of the slipperiest conditions of the day and a brand new set of wet tyres caused Jefferies to lose traction off the line. Smith started fast from P2 but found the holeshot line into the sweeper blocked by Jefferies. The resulting crash left Smith dead last, with a big gap to the pack. Teammate Andy Murray was also knocked backwards, leaving Chris Ashton leading Jefferies, Eldridge and Damian Giddins into the infield section. By lap three, Jefferies had retaken the lead closely followed by Murray now in second from Eldridge.

Smith up to fourth. Jefferies, still struggling for grip on the next lap, ran deep in turn three, leaving room for Murray to attempt an inside pass. Contact as the leader tried to close the line sent both cars spinning, letting Eldridge through to lead, which she then held for much of the race. Defensive driving on the closing laps made it difficult for the chasing Jefferies, requiring an outstanding piece of tactical driving to set up a pass. Jefferies appeared to be setting up an inside pass through the Demon Raceway's infield section for several laps, forcing Eldridge to a progressively tighter line. Jefferies switched lines with three laps to go, making his move on the outside line to take the lead. The battle had allowed third place, Smith, to close in and secure the final podium spot, the top three covered by barely one second at the finish. For us at trackside, it's a sign of just how good Jefferies is that we were all talking about how well Smith, coming through from last to P3, and Eldridge performed. Getting close to his level is an achievement for sure.

After the race, Eldridge commented, "The weather made it a level playing field for everyone - you just had to drive the car and not worry about the best additives or tyres. A few issues in qualifying left me 7th on the grid, which was far from ideal, but I gave it everything in the finals. I'm pleased with two podiums and the fastest lap against the best racers in the country. Now bring on round 2!!"

Zak Smith added, "A tough day for sure with the weather changing run to run and having to gamble on setup changes throughout. I was pleased to recover to third in the last final after an incident at the start left me at the back of the pack. It's great to finally be back at a big meeting and competing at this high level.

I'm looking forward to building on this second place as the season goes on and taking the fight closer to Olly".

Eastbourne's Billy Fletcher made the best use of his second-place qualifying position in the 13.5 turn stock touring car class, winning both final legs to resolve an all-day battle with Marcus Askell and West London's hope Ash Wiffen. Askell and Fletcher swapped positions throughout qualifying, requiring a countback to settle the tie for TQ in Askell's favour. But plenty of onlookers tipped Wiffen to take the win, comparing his relentless consistency to the aggressive approach of Fletcher and Askell. After riding the kerbs a couple of times in the chicane, a broken driveshaft pin nearly put paid to Fletcher's hopes, the resulting spin letting Askell and Wiffen through. Fletcher charged hard to recover, repassing Wiffen soon after. A spin on Aldershot's infamous banked sweeper then knocked Askell out of contention, leaving Fletcher to win for Eastbourne club from Wiffen.

Recent followers of 17.5 turn stock touring car racing are well used to the sight of Aldershot's Jay Westwood winning in wet conditions. The last King of Clubs race, the winter round at Eastbourne, was bossed by Westwood, and he repeated the feat at his home club this time out. Some might have considered Jay's sibling Glenn to be the favourite in the run-up to the meeting. Jay won two close-fought races between the brothers at the warm-up club meeting the weekend before King of Clubs, however, and continued to have the upper hand through the qualifying rounds, winning three to Glenn's one. Jay converted TQ to win the first final by a comfortable margin, but the second leg was one of the closest races of the day, just 0.9 seconds separating the pair after 5 minutes of racing. But the order was unchanged, Jay taking home the family bragging rights. 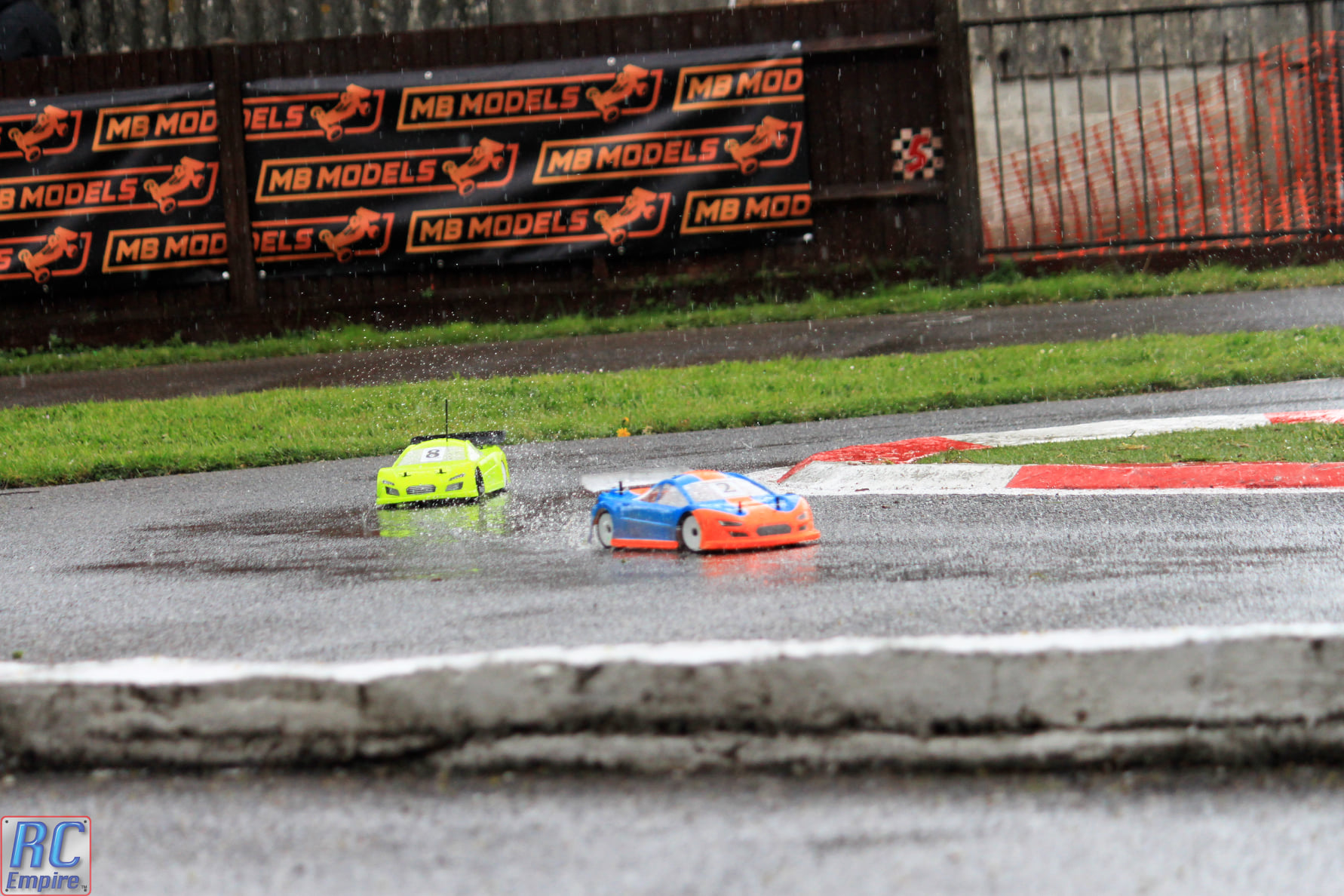 Another Aldershot team driver, Michael Lee, carried over his form from last year in the Monitex Formula One races. The F1 class is a unique challenge in RC racing, attracting a growing and close-knit group of drivers from the clubs. Lee TQ'd won three rounds, a loss to Daniel Robbins and West London's team pick Paul Ellis during round two, the only blemish in qualifying. It was clubmate Robbins who won the first final with a commanding win over Lee, a crash on lap 8 costing the favourite any chance of challenging for the win. Lee then responded in the best possible way in the second leg with a flawless flag to flag win. Behind him, Robbins could only manage fourth after an exciting race-long scrap with both the Eastbourne team picks, Darren and Aidan Gale. The three drivers separated by just over half a second in the end, and the two Gale's performances proved crucial to the Eastbourne club's score for the round.

Another growing class, the 'mini-touring car', also proved crucial to the Eastbourne club taking the round win. Eastbourne club co-captains Charlie Colby and Jack Collins had selected two drivers in the MTC class, Ollie Payne and Dani Young. This meant leaving top MTC driver Stuart Rand out of the team, a bold and decisive move for the young tacticians. However, the selection proved to be shrewd as Payne took home the class win, and Young finished fourth in class after an impressive final leg drive to second place, making up for a first leg eighth. Rand, one of the pre-race favourites, had out-qualified Young but could only manage sixth overall, a countback needed to resolve a three-way tie for fifth.

With Eastbourne winning the round by two points from home club Aldershot, the home team captain Mark Payne shared his disappointment. "We thought long and hard about the 6 selections and thought we'd got it right. Eatbournes MTC class team selection proved decisive, and congratulations to them". Colby and Collins agreed, commenting, "After seeing the first round of qualifying, we made the call to choose Dani in MTC. It proved to be a great move. Her stellar second final drive secured the vital team points. Harley storming to =2nd place in Modified after a difficult qualifying showed us why she is top class. Big thanks to the whole EECC club; it was a great team effort".

The MB Models King of Clubs Round 2 is at Eastbourne Electric Car Club on 6th June.