The 2015/16 1/12th National Series headed to Crewe for round 2 of the season. This is the last time that the Crewe national will be held in the Oakley Centre as in the coming days the building will no longer be standing. This venue first held a national in the early 90’s and we hope to see Crewe on the national calendar again soon.

In 10.5 Stock Xray’s Olly Jefferies once again had some competition looming in the background. Alexander Hagberg and David Spashett topped the time sheets in the first round of qualifying. Olly Jefferies was down in 3rd with Mark Stiles behind in 4th. After all 4 round of qualifying, Jefferies found the speed again was TQ just 0.102 seconds from Alexander Hagberg in 2nd and David Spashett in 3rd. The top three were covered by just over 3.5 seconds.
In the 10.5 Stock A Final, the field passed through the majority of the first few corners cleanly. Mark Stiles was the first to lose out with a roll at the first chicane. A few laps later Hagberg made a mistake, promoting Spashett up to 2nd. Hagberg fought back hard, pushing on Spashett for the 2nd position. Unfortunately, Hagberg made another mistake near Race Control and lost out. Spashett continued gain on Jefferies but Olly kept responding and increasing his lead gap. Hagberg caught up to Spashett and they continued to the end with the fight for 2nd place. As the buzzer went, Jefferies took the win by 0.336 seconds from Spashett and Hagberg who were separated by 0.490 seconds.

Mention has to be made to Jim Spencer who must own the widest LMP12 car in the field as he defends his 2nd position in the B Final despite Spencer clearly not feeling one with his machine.

In 13.5 Stock qualifying, Mark Jewitt took a large lead of 2.54 seconds over Peter Craig to take TQ. Gavin Clinch rounds out the top 3.

For the 13.5 Stock A Final, Jewitt built up a strong lead, but Ollie Payne was hot on his tail. Neil Diver was the first of the big movers going from 9th on the grid to 3rd. An unfortunate incident would mean that Diver was demoted back and ended the race in 7th. Andy Sawyer was another big mover going from 8th on the grid up to third. Jewitt would have a flag to flag victory by 2.688 seconds from Ollie Payne who could not find the speed to catch the leader. Andy Sawyer takes third, a very respectful finish from 8th on the grid.

Open Modified once again put an exponential amount of speed down on the track. During the first round of qualifying the crowd were blown away by the straight line speed of Alexander Hagberg. Despite Hagberg being able to eat up several tenths on the straight Olly Jefferies was able to maintain corner speed much more constantly. The pressure of Hagberg did not phase Jefferies and he stayed at the top of the timing sheet all day. David Spashett and Mark Stiles once again locked in 2nd and 3rd place for the final.

As you would expect of the top level drivers, the Open Modified A final went the first lap without any major incidents. Jefferies made his usual gap from Hagberg in the opening laps. In an attempt to catch Jefferies, Hagberg rolls at the first chicane promoting Spashett up to 2nd. Spashett and Hagberg had a sensational battle. Hagberg continued with his attach to get past on the inside of turn one but he was just not close enough. After some more intense laps, Hagberg found some more time coming off the final turn allowing him to get past Spashett on the inside of turn 1. After a incident mistake by Hagberg, Spashett is able to get past again and manages to maintain 2nd place to the end of the race. Jefferies took his win from Spashett and Hagberg. 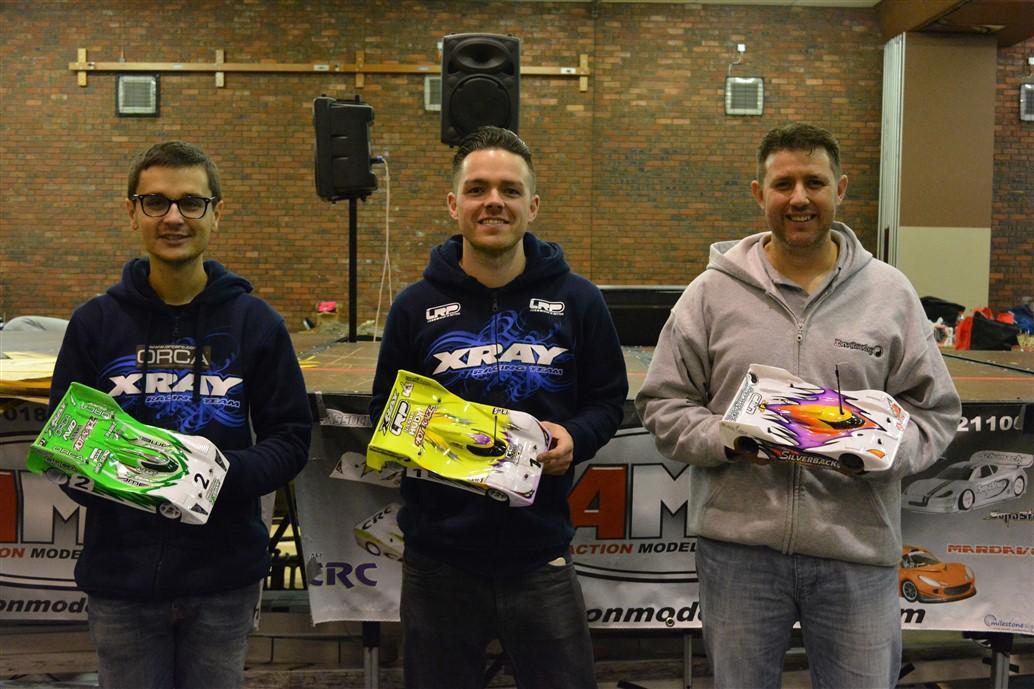 Tim Wood looked to be the early favourite in Sport Modified. Kellyann Bligh and Jason Butterfield also looked to be on pace for a TQ during the first stages of qualifying. Jim Spencer had a terrible time with his car setup and only managed 9th. Despite Woods early pace, Ollie Payne pulled a sensational run out in round 4 putting him on pole for the A final. Wood would line up 2nd with Bligh behind in 3rd.

After turn 1 a large clatter of cars came together launching some into the air. The top three managed to get away from all of the carnage and Payne started his charge to give himself a gap. After just one minute, Payne started to extend his lead away from the competition. A large battle for third with 3 drivers saw some brilliant racing. Jim Spencer made a charge for the front runners after avoiding the first lap carnage. Spencer would have trouble later on and end down in 8th. Aidan Ripley made his way up to 2nd in the first few moments of the race and a battle with Gavin Clinch. Payne made his way through the back markers narrowly avoiding several incidents on the way. The last few laps saw a nose to tail battle between Ripley and Wood for 2nd. The fight went down to the final corner before the timing loop where wood attempted to make a move but could not make it happen. The gap was just 0.171 between the two. Payne would take the win and take an extra lap over the entire field. A sensation drive from Payne and a very well deserved victory.

Once again the Crewe Radio Controlled Model Car Club put on an amazing show with a high level of detail. Thank you to everyone who helped and everyone for coming. We will see you in December at Tamworth for round 3 of the