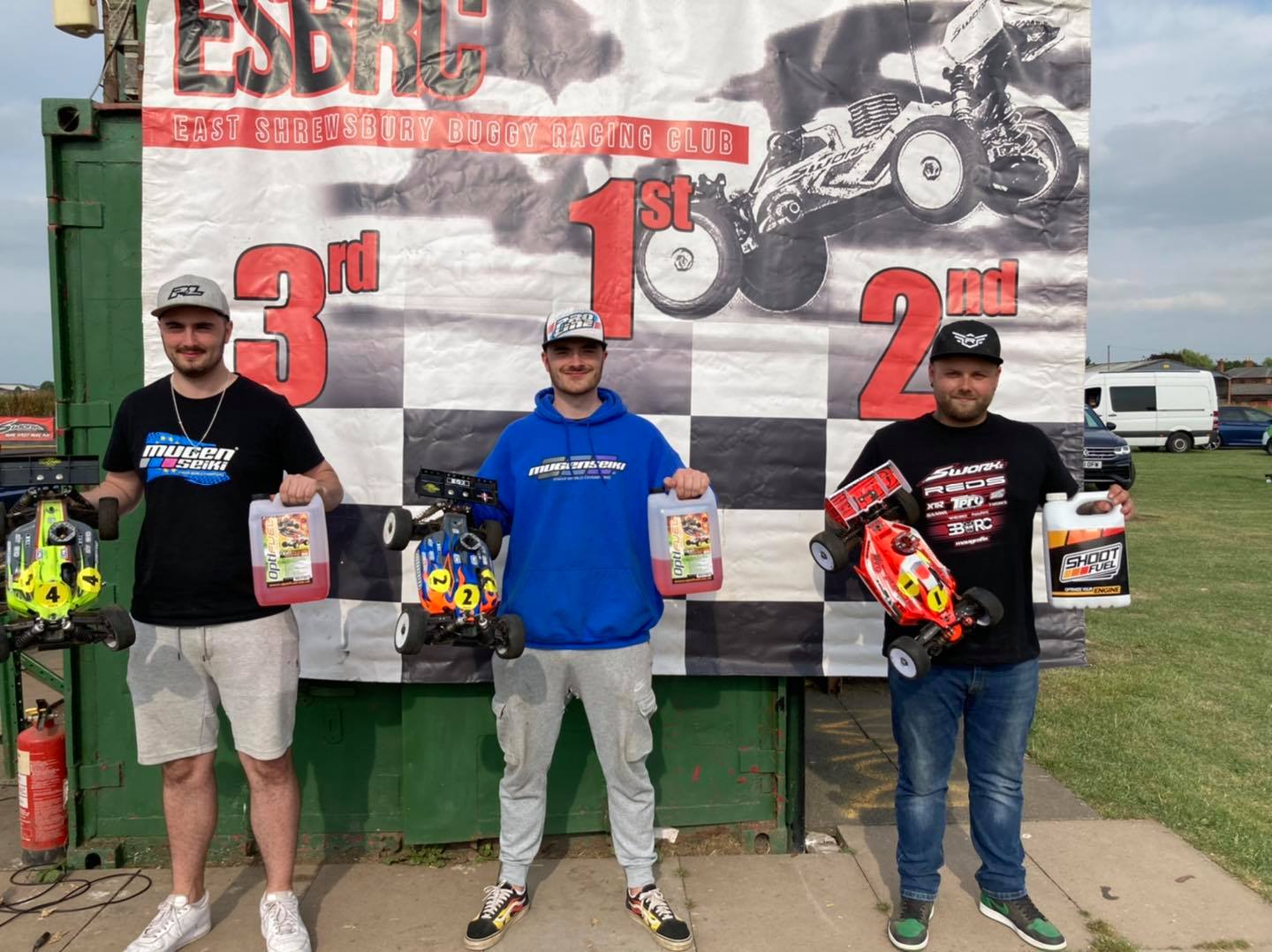 The 2nd round of the 1/8th RallyCross national championships took us to East Shrewsbury Buggy Racing club in the West Midlands on July 24th and 25th. This large, fast track with its unique surface would really mix things up and make for a great few days of racing, and with predicted unsettled weather tyre and set up choice may also come into play.

Fortunately the rain didn’t appear during qualifying and the absolutely stunning consistency saw Sworkz front man Elliott Boots take the TQ in every round, once again a fantastic achievement in this hugely competitive field of racers. Joni Skidmore and his Mugen secured 2nd overall with 3 2nd places in round, AE driver Neil Cragg managed a brilliant 3rd overall with Will Skidmore 4th and the ever present Graham Alsop and his HB machine 5th overall. 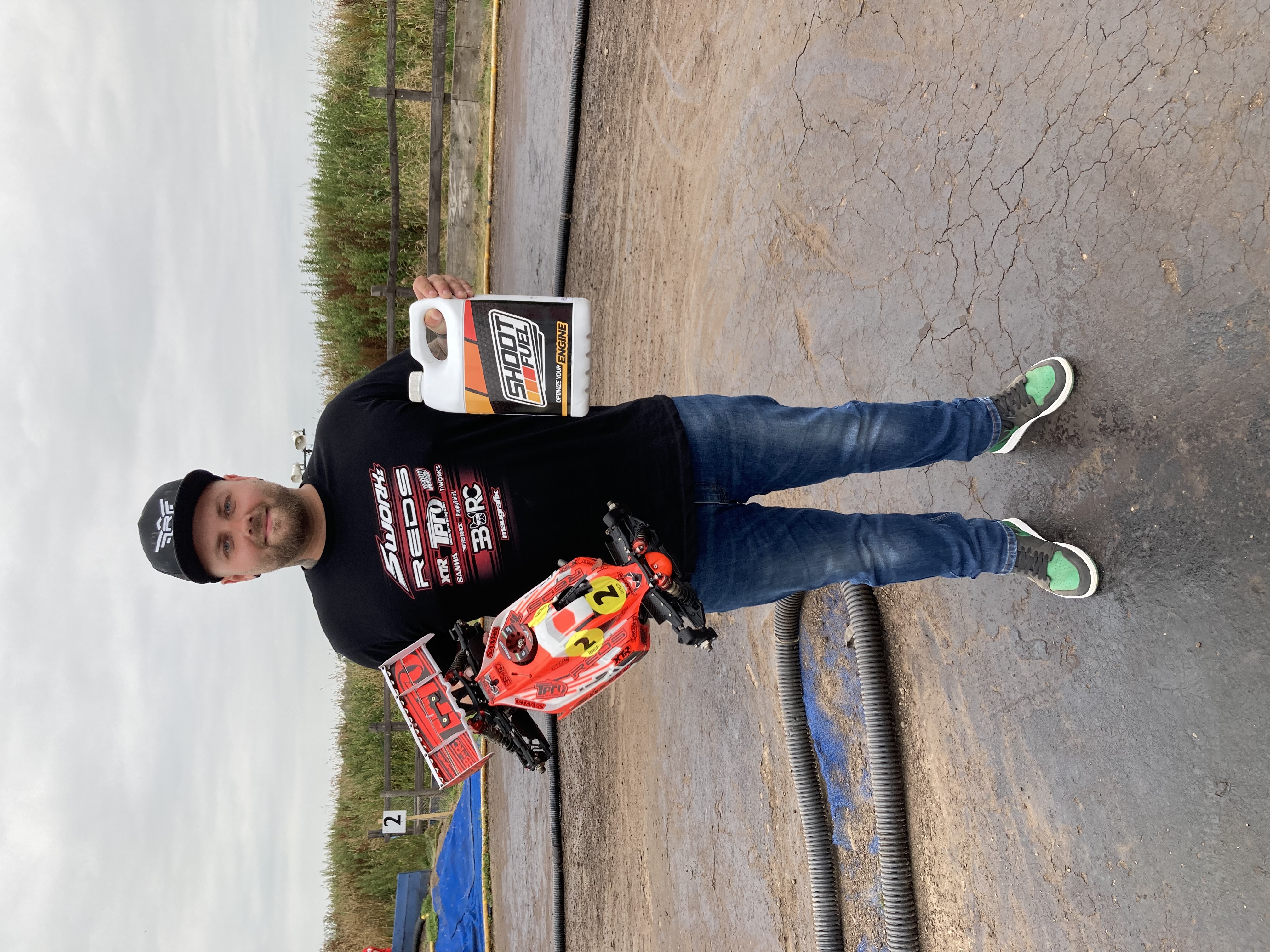 Finals began mid morning Saturday and ran for the majority of the day. The lower finals bump up spots were as follows:-

Up next was the quarters. The challenging track was proving hard on tyres and as well as the usual suspects at this level there were some clear under and over achievers as well. This meant that the 1/4s were stacked with talent!

The B 1/4 saw the Tekno of Mitchell Booth on pole, he had a fantastic start along with WRC driver Kieran Cox from 5th, the pair sharing the lead in the first half of the race, the AE of David Bailey was every present in the bumps also pushing for the lead but it was Kieran who took the win by a comfortable 10s from Mitchell who crossed the line in 2nd. 3rd was taken by Dave Bailey just 0.2s ahead of the Serpent of Jack Hirst.

The A 1/4 was all about the top 4 from the start. The lead was shared between WRC man David Gibson, Jnr Sworkz driver Dylan Saunders and HB driver Simon Reeves, the trio racing in close proximity for the full 20mins and all taking there turn out in front, fellow WRC driver Matt Box was also well into the mix starting in 2nd and eventually coming home 4th with team mate David Gibson in 3rd, Simon Reeves in 2nd and a great win for Young Dylan to take the win.

Onto the Semi finals and the B side saw Mugen man Joni Skidmore on pole. Joni had a stunning drive, his pace and consistency meaning he lead from buzzer to buzzer, taking the win by a comfortable margin. The remaining 6 spots for the main were not so easy, a fantastic race between AE drivers Darren Bloomfield and Mike Lewis and the Losi of Dom Nunn would make life hard for Will Skidmore and his BLOK powered Mugen who started in 2nd on the grid. The 4 were all taking there chances, an unfortunate failure for Dom saw him return to the pits leaving the other 3 to battle for the next 3 spots behind Joni. Darren managed to retain the 2nd spot in front of the extremely close pair of Will Skidmore in 3rd and Mike Lewis in 4th with less than 3s between them! 5th was secured by Agama driver Lee Martin, 6th by Sworkz man James Le Pavoux. 7th went to Jack Hirst after a stunning drive from 13th on the grid to take the last and final bump to the A main!

The A 1/2 was another awesome display by the Reds racing powered Sworkz of Elliott Boots, he dominated, taking the win and getting the lap on the rest of the field in the 20min final! His time faster than the previous semi final securing him pole in the main. Neil Cragg had a great start from 2nd and chased down Elliott for the first part of the race, but unfortunately it wasn’t to be again for the AE man as he unfortunately returned to the pits and dropped down the field just before the 1st pit stops. This opened up 2nd place which was mainly occupied by Sworkz driver Callum Niblett, he too having an incident in the final lap but his pace meant he eventually finished down in 4th. It was Jamie Clancy who took advantage of Callum’s drop and the AE driver took 2nd ahead of the HB man Graham Alsop who got 3rd. Young AE driver Tommy Hall got 5th after coming back from a tricky start to the race, he was followed over the line by bump up driver Dylan Saunders and his brother Jamie Hall, the 3 youngsters completing the bump up spots.

So a first for us 2 pairs of brothers in the A main final, the 2 Skidmore brothers and the 2 Hall brothers! A great achievement for both families!

The A main would begin with Elliott on pole and Joni 2nd and despite one lap of it staying that way Will Skidmore managed to take the lead on lap 2 and string out the field. An unfortunate start from Bloomfield saw him drop to the back of the pack from 3rd so it was all about the Skidmore brothers and Elliott fighting for the lead. Will dropped back to 3rd on lap 12 and the front 2 had then had an epic race against each other. Some amazing close racing, fantastic overtakes and very few mistake by the pair saw them both share the lead, unbelievable racing on track by both drivers. Around the half hour mark Joni pitted first leaving Elliott to pit the following lap but an uncharacteristic bobble meant Joni took the lead and despite Elliotts amazing pressure and pace Joni managed to retain the lead. The BLOK powered Mugen crossing the line just a few seconds up from the Sworkz of Boots, and Joni getting his 2nd win of the series. Will secured 3rd spot meaning he too had his 2nd podium of the series. A seriously impressive drive by Darren saw him get 4th after his tricky start and Graham Alsop got 5th. Some stunning driving by the entire field of racers for a full on 45mins of thrilling action.

With round 3 of the series just next week down at Herts it’s going to be seriously close in the series. The full standing and all the weekends results can be found here https://www.brca.org/8rx-results

Thanks to East Shrewsbury BRC and the BRCA RallyCross team for a great weekend of racing once again. We can’t wait to do it all again next week!