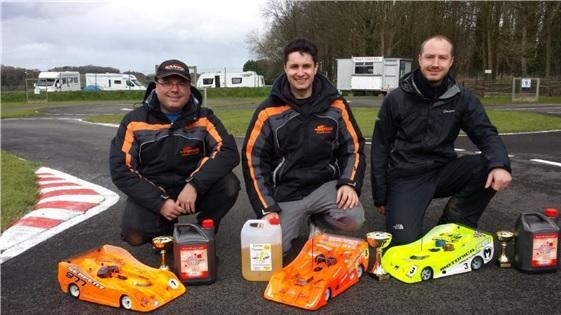 The first round of the 2015 season was hosted by the Cotswolds Club and the weather forecast was for rain all weekend and it didn’t disappoint. Over the winter we normally see a host of drivers switching teams but this year it seems to have remained static at the top. One notable change is Jason frost switching to the Capricorn team to partner team leader Kyle Branson and Neal King.

Also a host of London drivers have made the switch to Capricorn which is now becoming a very popular product down the pit lane. It was also nice to see Lee Kormer making his first appearance after missing most of last year through illness and the birth of his newborn.

At the sharp end of the grid, Serpent are well represented with Mark Green, Tim Wood, John

Carr, Wayne Briggs and Steve Scott. Shepherd have a strong team with Andy Hastings, Ashley Gouveia and Richard Waters. In the Mugen Seiki camp it is again Andy North with support from Mike Walton at local tracks. Motonica is again driven by Daniel Bancroft.

Saturday was free practice and with the track being wet all day with no sign of it drying, allowed drivers to talk setups and work on their cars for hopefully a dry Sunday. Sunday arrived and it was raining consistently and strong winds made conditions very tricky. The meeting was delayed by the committee to see if conditions would improve to allow the racing to commence. With many drivers deciding to not race, the entry reduced from 6 heats to 4 heats with a total of 20 remaining.

The pace setter after round 1 was Chris

Snell with 12 laps followed by Andy

Hastings with 11 laps. These drivers were using full kissling wet tires since the track consisted of standing water. In round 2 the pace increased with Steve Scott recording 12 laps but in heat 4, Mark Green taking wide driving lines recorded

14 laps which would certainly guarantee a

top qualifier position since his car looked to have double the amount of traction even compared to his closest challenger. In round 3, significant movers were Tim Wood and Andy North who recorded 11 lap results and would put them in the top ten. The track for the final round had less standing water but the full wet tires were still the tire to use. In Heat 2, Vincent Menzies recorded 12 laps to secure a top final position and in the following heat, Chris and Sam Snell also recorded 12 laps to guarantee top ten places. So into the final round and it was Mark Green who again was in a different league and recorded 14 laps but a slower time to his previous best. Daniel Bancroft with his one and only run posted 12 laps to jump into third overall

The top ten were as follows:

The A final started in damp conditions with all drivers deciding to run damp tires. Upfront, it was

Green who started to pull out a comfortable lead over the chasing pack of Wood, Bancroft, Hastings, and North. The first retirement was Hastings with a blown plug but continued and eventually retired on 47 laps. Upfront Green was cruising to victory until a out of control car hit him on the back straight which broke the car and allowed Wood to take the lead. Green then managed to limp to the finish to secure second place ahead of Bancroft in third.

Final Positions are as follows: