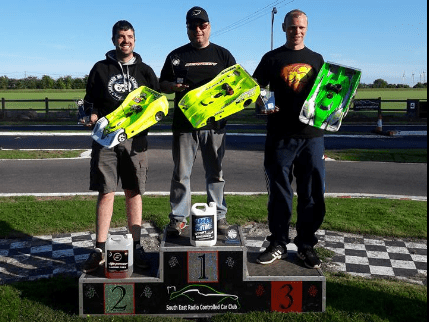 Round four took place down in Kent at the Brookland circuit in a joint meeting with the 1/10 section, around 80 drivers were competing which made for a good atmosphere. The Brookland circuit layout is made up of big straights and hairpins with a chicane in the middle meaning horsepower and good fuel consumption is very important.  For this year the circuit was partly resurfaced and much better than the previous years although still quite unforgiving if you touched the high kerbs. Jarrett Williams of 1/5 scale joined us to have some fun with a Mugen 1/8 nitro car for the first time thanks to Yeovil Models Cars. 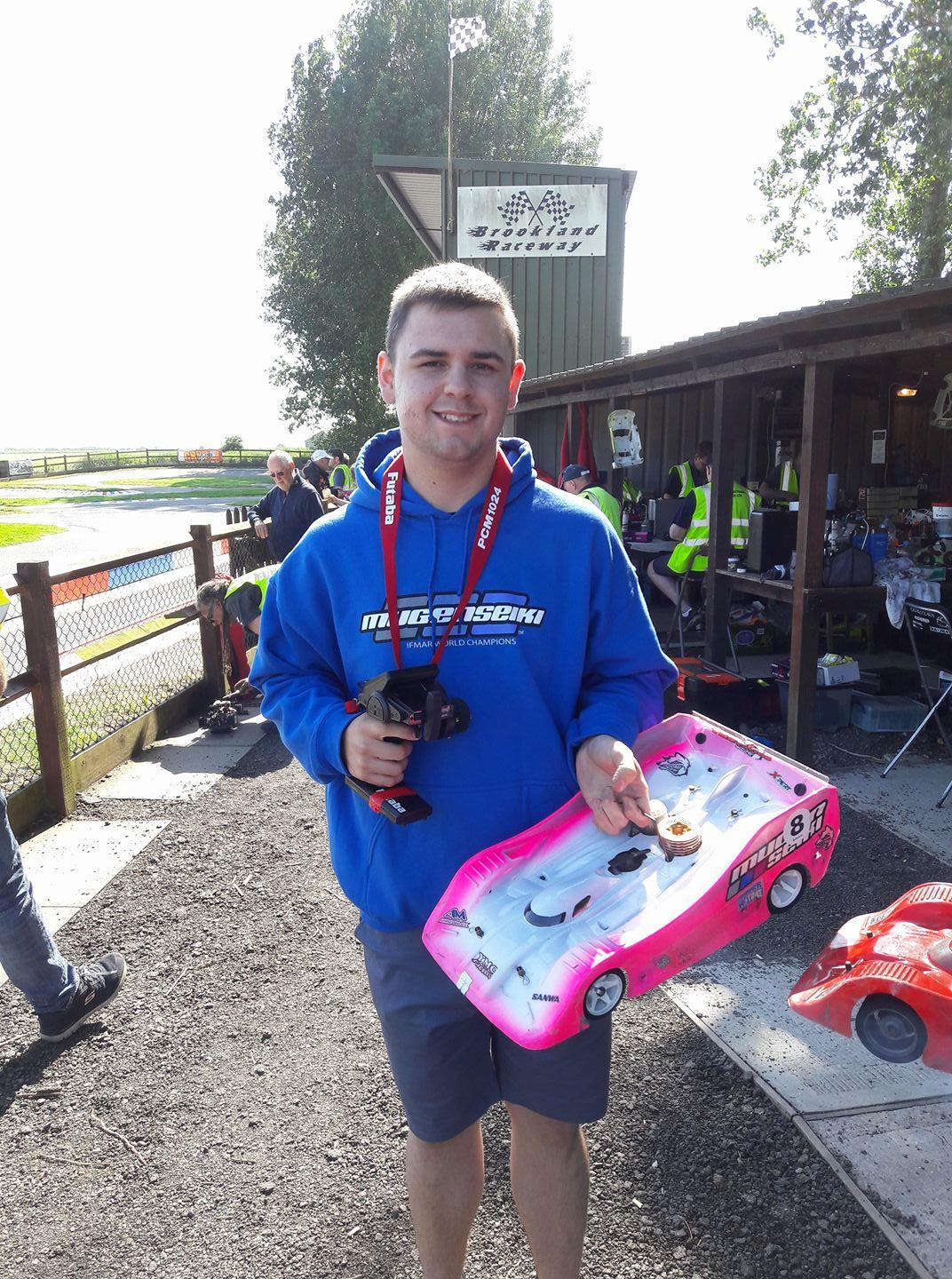 Temperatures were high with sunshine throughout the weekend, qualifying used the round by round system for this event with Mark Green (Serpent) taking pole position having found an engine to do five minutes without a fuel stop, ahead of Alex Thurston (Serpent), Tim Wood (Shepherd), Andy Hastings (Shepherd) and John Carr (Shepherd). In the 30 minute final many of the drivers had technical issues allowing Mark to win by 3 laps from John Carr and Neal King (Capricorn).

In the Electric class Craig Nutting (ARC) was the class of the field winning from Jamie Paton (Serpent) and Devandra Mahatme. 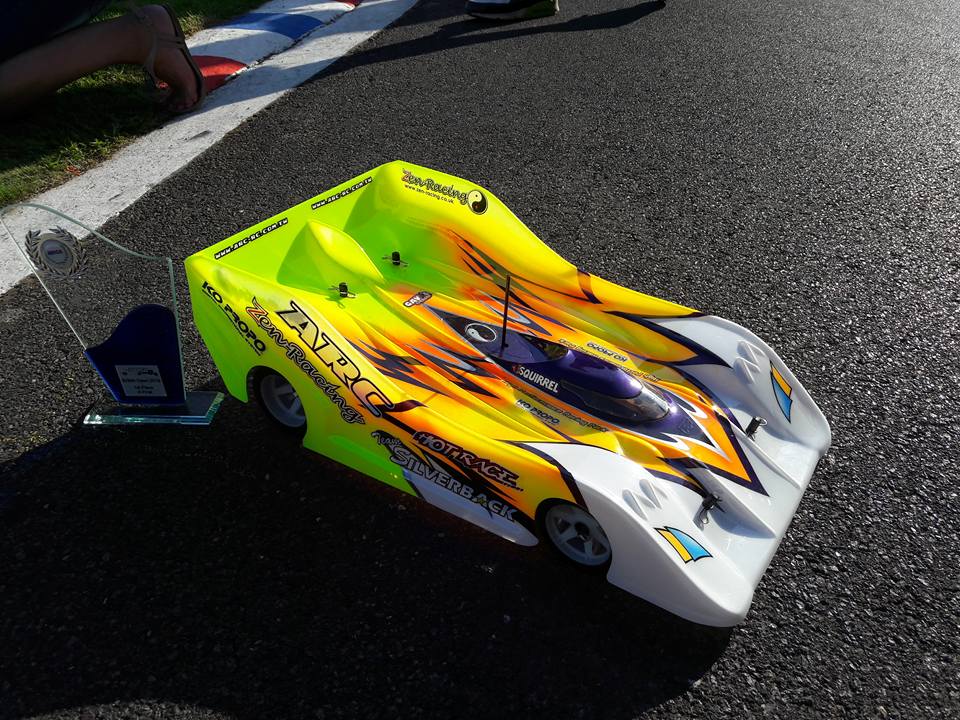 Round five saw the Championship head to the Mendip circuit near Weston-Super-Mare, drivers reported that the traction was much better this year after the track was sprayed. Again the top two drivers fighting it out were Tim Wood and Alex Thurston, with Alex taking TQ. Andrew Hastings qualified third from Neal King, Clive Connolly, Sam Snell, Giorgio Acanfora, Daniel Ludena, Niall Cockran and Chris Snell completing the A-final lineup for the 30 minute race.

The electric class had a smaller turnout but still very competitive with Championship front runner Craig Nutting continued to dominate from James Ellice and Adrian Dew.

In the C-final John Glazbrook won from Lee Korner and David Briggs, Rob Scott put in a great performance with his Shepherd taking the B-final win after radio issues during qualifying. Completing the B-final podium in 2nd was Bjorn Baldwin (Serpent) and 3rd was local hero Mike Manning (Mugen).

In the A-final unfortunately a restart when needed after a mechanic was struck on the foot at the start, Alex lead the field away and was comfortably in the lead until he hit gearbox issues. This allowed Tim Wood to move ahead after battling with Neal King. Andrew Hastings was an early retirement also, leaving Tim to take victory from Alex who was able to recover and Clive Connolly driving ARC took third after Neal King retired.

Adrian Dew pulled off an upset taking a second place and first after Craig Nutting retired early in leg 2. Congrats to Adrian (Serpent) taking his first overall win in the class. James Ellice rounded out the podium with third overall behind Craig Nutting. 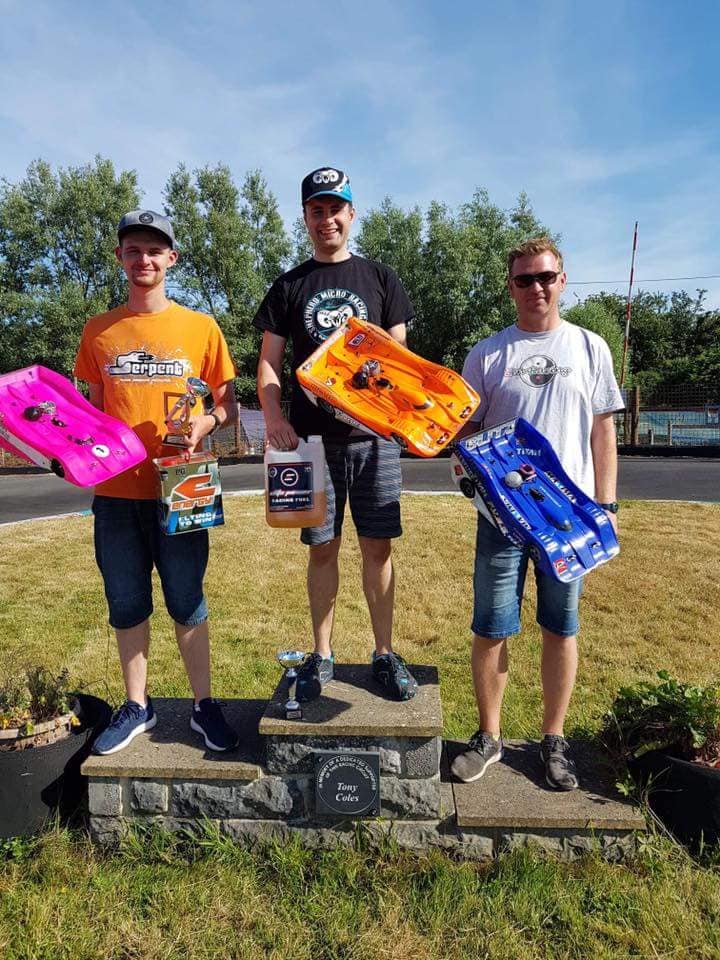