South Yorkshire Raceway saw the inaugural national meeting open the books on this never before seen class combination - the grand prix of the GT’s and F1’s. After the infamous GT12 class lost its national status in early 2014, when it ceased to be the 1/12 support class, GT12 really needed its own section to return to its former glory and flourish as a driver’s class.

With a limited 30 driver grid seen at the 2013/14 supporting nationals and grey areas of rules being pushed further and further every round, the class that was so reputable previously, was struggling to keep afloat. The Clubman’s series was developed to back the class this year and with initially mild interest, it wasn’t looking good. However once the National series had been finalised, class popularity sky rocketed, with the final round of the Clubman’s series reaching an all time record of just under 90 participants!

The New class on the block...

The SYR meeting also saw the introduction of the new and improved F1 class at a national event. It was Darren Newton that mentioned to me at the start of the clubman’s championship that a national series was in the developing stages and that he wanted to run GT10 and F1 alongside each other, as both classes were barely surviving independently and national status might just be the popularity booster that the two classes needed. In the off-season leading up to 2015 a well-respected, very capable committee was formed, the paperwork was taken care of and everyone got their cars set and ready to rumble for the inaugural grand prix of the GT nationals.

SYR in Sheffield had never held a national event before...and you couldn’t tell in the slightest, the track was flowing and minimal circuit maintenance was needed throughout the day, not forgetting the flawless timing. A big WELL DONE to Chris Ratcliffe and the team at SYR, you did an exceptional job at keeping the drivers happy (we know it’s sometimes hard to do!).

Down to the action!

It was a very exiting A main from the GT10’s and the action really set the bar high for the rest of the day’s main events. Jimmy Madison started pole after an excellent qualifying run but had a shocker of a start to the main dropping 2 laps in the first 30 seconds of the final from an uncharacteristic mistake and ran into trouble with other cars on track...But Maddison didn’t give up here, oh no, quite the opposite, he picked his head up and fought back, un-lapping himself twice to take 5th place. It was impressive to see this unmatchable pace and he summed that performance up by simply saying “I drove my heart out man!” and you can’t argue with that, but Madison’s earlier troubles allowed Jamie Paton to take full advantage and gain an astonishing four places to take the win and top step on the podium. Darren Newton was left to a great run in the absence of Madison’s mad pace and was able to bag 2nd place. Credit to Chris Blackey and his LMP style GT10 for his top performance as he produced a spectacular six place make up, after a less than ideal qualifying – to take the final step of the podium. I think we might all agree it was the best looking car out there!

The highly anticipated F1 main event was next on the agenda and everyone wanted to see if the class could produce some exiting, clean racing... it didn’t disappoint. Considering that the drivers were venturing into new territory as far as tyre compounds, car setup and track evolution was concerned, it was a model, clean final which produced some unquestionably exiting racing, especially from further down the order. Positions were being traded tirelessly throughout the race, Lomas took full advantage of his earlier pace gaining three places, whereas the race wasn’t quite as enjoyable for Kevin Creaser and David Underwood as both unfortunately dropped time through incidents.  As Mark Green ran the show in the qualifier; he had the confidence in the car to dominate once again in the main, lapping 2nd place to take the victory. Mark Green, better known for his gas car efforts was a clean, Green, apex-hitting machine and as he had done all day, took his new Serpent all the way to the top step of the podium.

The return of the GT12 class to the nationals was always going to be interesting but for three drivers it seemed a pretty easy day of racing. Catchpole took the top spot in the qualifier, with Stiles 2nd and Price 3rd. The podium was unchanged for the final as all three had an exceptionally clean race. Clean race in GT12? Yes, it impressed us as well; maybe they have cleaned up their act after learning their lesson...

The distinguished Andy Murray had a surprisingly bad run as he ran into traffic problems setting him back to 6th. Maybe he will remember to put the traffic report on next time as his final position was not what his outright pace suggested, a pace arguably capable of top three. David Gale snatched 5th off Murray as he took full advantage of his traffic woes.

The GT12 class proved to shine brighter than ever before at this type of event, anyone pondering whether to get into this inexpensive, fun and un-surprisingly competitive class should certainly do so. The class is ever-growing and becoming the class it should have always been, the over-competitive, rule bending days of old are over, the class has never been more alive! I would encourage anyone with an interest in any of the classes seen here to pop over and have a watch of the day’s action, it may just spur some new talent to join the fray!

Well that concludes the epic action at South Yorkshire Raceway and it’s still all to play for in the championships with just three rounds to go! Will Catchpole end up trying to catch-pole? Will Paton drop into the pattern of winning? Will Green turn green with envy as another F1 driver takes the top spot? Its’ still all to play for.... Onwards, Broxtowe...

For more information check out the BRCA GT NATIONAL PAGE 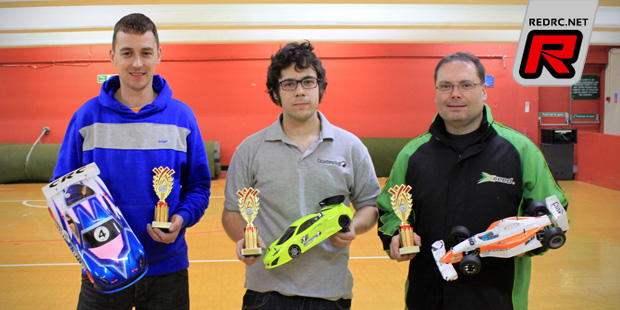